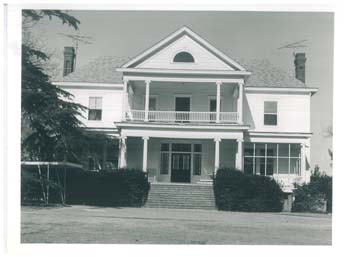 During John Edward Wannamaker’s youth, Aeolian Plantation, where he was to settle and build his family home, had a comfortable overseer’s house. It was in this house that Mr. Wannamaker lived alone for a time in order to manage the plantation’s large operations. He came there in 1872 following his graduation from Wofford College. Because of the strong winds that swept the place, Wannamaker named the place Aeolian Hill. He razed the overseer’s house to build a one-story dwelling about 1875. To this home he brought his bride, the former Martha Nelson Duncan of Spartanburg, in January 1878. Twenty-two years later (1900) John E. Wannamaker enlarged the house and added a second story. Bruce and Morgan, architects of Atlanta, Georgia (also the architects of Clemson College) drew the plans for the addition. Mr. Wannamaker took pride in having taken all the measurements used by Bruce and Morgan in the remodeling plans. Dr. John E. Wannamaker was named in Thomas Clemson’s will as a lifetime trustee of Clemson. His biography appears in Men of Mark.

This stately home and her rich fields were to continue to be the setting of significant events, for it was at Aeolian Hill that the Clemson-Nonshatter soybean was developed by Dr. John E. Wannamaker II. Dr. Wannamaker, II was born October 1888 at Aeolian Hill Plantation where he lived his entire life. After his graduation from Wofford College in 1910, he began farming on an extensive scale. His accomplishment in the breeding of soybeans and cotton has been widely recognized. His work in this field has had a marked influence on the agricultural economy of the South. He died at his home on November 24, 1965.