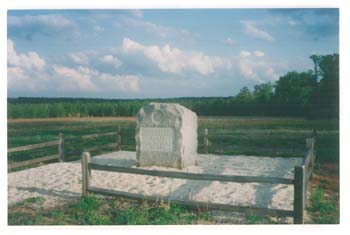 This British garrison consisted of field works around a large mansion house belonging to Mrs. Rebecca Motte. Opposite the garrison, to the north, stood another hill where Mrs. Motte resided in a farmhouse. On this height, Colonel Lee took post with his troops while Marion occupied the eastern declivity of the ridge. The large mansion located in the center, left but a few yards uncovered. Marion and Lee decided to set fire to the building in the fort and force surrender. Mrs. Motte was informed of the intended action and not only assented, but declared that she was “gratified with the opportunity of contributing to the good of her country, and would view the approaching scene with delight.” She obtained bows and arrows, which are reported to have been given to her brother, Miles Brewton, by the captain of an East Indian man-o-war. Mrs. Motte then gave permission for General Lee’s men to make fire-arrows and thus fire her own home. The British sent a party to the loft of the house to knock off the burning shingles, but the continentals raked the loft from one end to the other and drove the soldiers down. The gallant British officers were sent off to Lord Rawdon, who had retreated from Camden and reached a position opposite Fort Motte and encamped on the highest ground there. The other British troops were placed under security as prisoners.