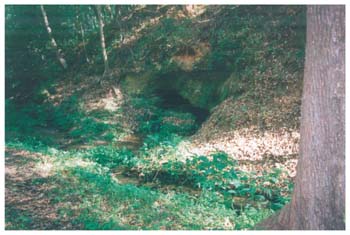 An unusual beauty spot upon which a series of caves is located in the Southeast Basin of South Carolina, referred to in South Carolina Geology as the Lower Pine Belt or Savannah Region. The area is a part of the Santee Marls, which form the lowest member of the calcerous strata of the Charleston Basin. It falls in the Pliocene and Post Pliocene Periods.

Cave Hall, also called Wright’s Bluff, is on the Santee River, the waters of Halfway Swamp, and Bull Bluff Creek. It traverses Clarendon County to its northwest corner and was granted to the Honorable Chief Justice Robert Wright in 1735 and comprised 2,000 acres. It was sold by Wright’s estate in 1755 to Moses Thomson. Thomson sold 1,400 areas of the tract, keeping 600 acres called Cave Branch, which ran next to the river. It was on this tract that Moses Thomson established his Cave Hall Plantation. His grandson, William Russell Thomson, either inherited or bought the place. William Russell Thomson, son of Colonel and Mrs. William Thomson, was born April 22, 1761, and died in 1807.

Not a great deal is known of Moses Thomson who bought Cave Hall. However, the prominent life of William Russell is well documented. Moses’ son, Colonel Thomson, established Belleville, which helps to explain why the grandson settled Cave Hall.

William Russell Thomson married Elizabeth Sabb, who was born at Bellebroughton June 27, 1761, and died at Totness on November 8, 1838. Apparently, after the death of William Russell, Cave Hall was no longer a Thomson residence since Elizabeth Sabb Thomson left there sometime after his death. We do not know the location of the house site—a site which would prove to be one of the earliest in the country.