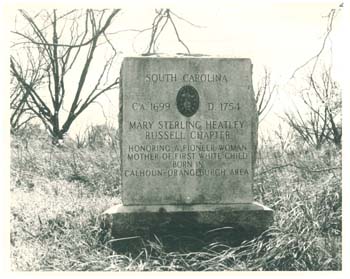 George Sterling, explorer and Indian trader, received a 570-acre land grant in March of 1704, and settled here when Santee and Congaree Indians were living along banks of the river. Sterling’s daughter Mary married Richard Heatly in 1714 and moved here about 1717. Their son, William, born 1718, was thought to be the first European child born in the area. After Heatly’s death in the early 1720’s, Captain Charles Russell married the widow Mary Sterling Heatly and by 1725 they were living on a part of the original land grant, then owned by William. This land was sold to Russell in 1731.

Captain Russell had served as Commandant of “Fort Congaree” near the present town of Cayce from 1718 until the end of its operation in 1722. He and Mary Sterling Russell built their home on the Cherokee path near Amelia. Appointed to the offices of Justice of the Peace and Captain of the Rangers, in 1734 Russell was also appointed by Governor Johnson as agent for the three townships of Amelia, Saxe-Gotha and Orangeburg. When he died in 1737, he was serving as Agent to the Cherokees. The Russell home was a stopping place for Indians using the Cherokee Path. Later, Mrs. Russell was among the residents of the area who permitted Reverend John Giessendanner to hold services in their homes. A chapel was built nearby in 1757 and services were held there.