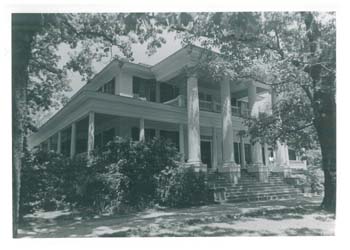 Built by Squire W.A. Hennon in 1855, it is similar in architecture to Olin M. Dantzler’s summer house. Squire Hennon was the first large merchant of St. Matthews. In the 1880s, the house was reoriented to have a second story (facing Church Street) using Victorian decoration. The second story had two rooms facing Church Street. In the early 1900s, R.D. Zimmerman purchased the property from the Cain Family. Mr. Zimmerman hired Architect Johansin, who squared off the upstairs and made the front of the house to face Railroad Avenue, using Greek Revival and using massive, handsome columns of today. The door facings appear to be original to 1855—the doors are new. The window facings also appear to be original. The remodeling was completed prior to 1908.