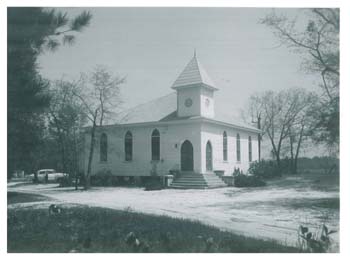 The first house of worship was built about three miles north of the present location of Sandy Run Church on the west bank of the Congaree River, near the mouth of the Sandy Run Creek. The settlers soon found that they could not live so near the river and moved inland. They then built their second church building near the present site on the old State Road. The third building constructed was at the same location on land that is now used for the cemetery. This building had a balcony for the slaves. For a number of years it was used as a “Union Church.” The cemetery contains the dust of the Reverend Christian Theus, who preached in this area until his death in 1789.

During the War Between the States, the ladies met in this old church to sew for the soldiers. In 1889, this building was remodeled and the balcony removed. In 1917, it was destroyed by fire during a church service. The pastor, the Reverend Robert Elford Livingston, calmly picked up the Pulpit Bible, which was later used until 1945, and walked out of the church after the members. The congregation saved the pews, the organ, and the communion set. Sunday services and Sunday School were held in the parsonage until the present church was completed.

The first service was held in 1918 in the present church, and was the funeral of its pastor, Reverend R. E. Livingston. The church was dedicated June 30, 1919.

The Reverend E. F. K. Roof was the only minister who came from this old historic church. He was the son of E. J. Roof, who was the Superintendent of the Sandy Run Sunday School for more than forty years. Reverend Roof graduated from Newberry College in 1910, and the Southern Lutheran Theological Seminary in 1914. He served pastorates in Georgia, North Carolina, South Carolina, West Virginia, and was serving the Silver Valley Parish in Lexington, N. C. when he passed away on October 24, 1954.

The Geigers, present members of the Sandy Run Lutheran Church, are descendants of Jacob Geiger who settled in this section in 1737. The present individual communion set was the gift, in 1944, of the late Percy L. Geiger. This replaces the communion service which was the gift of Henry Muller, Sr., and which was purchased in Germany about 167 years ago. During the Confederate War, this Communion Service was buried for safekeeping, and later dug up and placed in use, almost in perfect condition, and may be seen at the Calhoun County Museum.