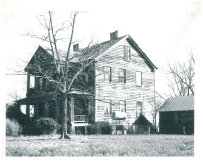 William Baker’s “Manor House” was built around 1830 in the style of Greek Revival. The lovely house features a full-length piazza and gabled second-story portico. The interior displays exacting workmanship of the period. Built high on a hill, the house lends one a commanding view of the city of Columbia.

This is at least the second house to be built on this site. The first house was occupied by William Baker II (1753-1839) and his wife, Barbara Likes Baker. It was here on Thursday, December 7, 1815, that the Bakers extended their hospitality to the Bishop Francis Asbury.

The Baker Plantation was vast and was composed of lands granted to William Baker I, beginning in 1735, also from the lands of ; William York; John Myrick; a town lot in Saxe-Gotha; and John Jacob Geiger. By 1790, William Baker owned eight slaves.

The house and property remained in the family until after the War Between the States, when it became the property of the Wolfe and Franck families.

This impressive home, located within the town limits of St. Matthews, was built by Colonel James Arthur Banks, Sr. about 1893. Probably in 1909 the large Corinthian columns and the small straight columns were added. They were designed with Ionic capitals and supported a decorated frieze, both examples of Classic Revival architecture.

Colonel Banks was the second Senator of Calhoun County. Also, he was President of the Home Bank, President of the State Fair Association, Chairman of the House Ways and Means Committee when he served as a member of the S. C. House of Representatives from Orangeburg County, and Mayor of the town of St Matthews.